Death as illustrated by Paul Kidby

The Grim Reaper in the form of a skeletal body in a black robe, with a scythe and speaking in CAPITAL LETTERS appears for the first time in The Colour of Magic. His job is to collect human souls. Death is the servant of Azrael, the “Death of Universes”. Opposing him are the Auditors, who want nothing more than the end of all life (it’s soooo messy).

At home Death has a servant, Albert and a daughter, Ysabelle. Kittens and swans are his favorite animals and his horse Binky is with him on each collection.

Because of his fascination with humans, Death sometimes leaves his post to seek understanding. This tends to cause problems because humans don’t like to see what they do not understand and the universe likes the souls of dead people collected. The only ones who can see Death for who he is are witches, wizards, cats and children.

In The Art of Discworld Terry tells us that he has received a number of letters from terminally ill fans in which they hope that Death will resemble the Discworld incarnation (he also says that those particular letters usually cause him to spend some time staring at the wall).

While Death appears in the previous books, Mort is the first book in which he becomes a main character.

Mort’s family specialized in distilling wine from reannual grapes. (“Reannual are plants that grow backwards in time. You sow the seed this year and they grow last year.”) These growers tended to be big, serious men, much given to introspection and close examination of the calendar. Mort (the youngest son) on the other hand, was tall, red-haired and freckled, with the sort of body that seems to be only marginally under its owner’s control; apparently built out of knees.

Hopeless as he is, Mort’s father decides to take his son to the hiring fair at Sheepridge. At this hiring fair men looking for work would stand in ragged lines in the centre of the square waiting for a tradesman to hire them as apprentices. Noone seems to want Mort, but just before the clock has struck its final strike at midnight, a prospective tradesman enters the square. It is Death and Mort can see him as he really looks. Mort is hired as an apprentice and Death and Mort ride off on Binky.

And so, Mort is off on the adventure of his life learning all sorts of useful things – like how many shades of black there are and how to walk through walls. Obviously death is a theme of all of the books in the Death series. Terry treats this subject with warmth and a light heart. Death comes to us all, after all. Poor old Death is going through a mid-life crisis, and Pratchett’s gentle mocking of the phenomenon is heartwarming. 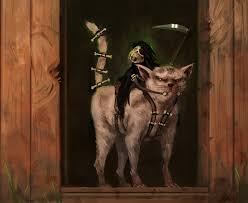 “Death of Rats” by Alex Thomas

The terrible Auditors of Reality have been at it again. To them the fact that Death seems to be developing a personality is the sin beyond sins. So, they decide to retire Death and Death is resigned to that decision. What happens when there is no longer a collector of spirits?

Back at the Unseen University Windle Poons – the oldest wizard – is waiting for his collection by Death. He knows to the minute when this is supposed to happen. But does it? Windle Poons certainly dies, but no one shows up for his spirit, so he decides to go back into his body. This tendency seems to be spreading to other people.

Now that Death has his own hourglass with sand running down, he has decided to make the most of the life left to him. High up in the Ramtops a figure on a horseback turns up. He knocks at the door of Miss Flitworth asking for help. The stranger goes by name Bill Door. The main qualification needed is the ability to use a scythe, and one might say that Bill is excellent at the job.

Back at Ankh-Morpork Cut-Me-Own-Throat Dibbler has discovered something that he thinks will make his fortune (again). This time he has found some strange globes. When they are shaken a cloud of little white snowflakes swirl up in the liquid inside and settle on a tiny model of a famous Ankh-Morpork landmark.

And finally, magic is behaving strangely at the UU. It seems all of the Life drifting accross the Discworld is acting like water building up behind a dam when the sluice gates are shut. Needing a place to go, it manifests itself in all sorts of phenomena. The wizards decide they have to meddle with all of the strangeness.

Terry addresses fate, life, death, consumerism and relationships in Reaper Man. I’ve seen reviews that praise Reaper Man to the sky and others that despair of Pratchett’s writing this books. For my own part, I rather liked the book. It juggles the serious and the silly quite well in the jump between Flitworth and the wizards.

Mort and Ysabell married and had a baby – a little girl they named Sarah. At age six, Sarah, makes her teachers at Quirm College for Young Ladies extremely nervous. Strangeness tends to happen around the girl and she says the most bizarre things. But Susan didn’t really worry about what other people thought about her. And that continues through the years at school.

Sometimes the gods listen to the words people say. Imp Y Celyn (Buddy) said to his dad: “You don’t know anything! You’re just a stupid old man. But I’m giving my life to music! One day soon everyone will say I was the greatest musician in the world.” In retrospect, perhaps not the wisest words, but they do make for a good story. When he chances upon a pawn shop guitar and becomes possessed by it, rock and roll enters the Discworld. This means some serious hip-rolling and swooning fans. Imp’s band “Music With Rocks In” acquires a manager in Cut-Me-Own-Throat-Dibbler. He tries to do what any good manager would, cash in on the band while keeping them in the dark.

Death has decided to go on another of his walkabouts. Unfortunately, for Susan Sto Helit (Death’s granddaughter) that means leaving boarding school to carry on the family business. Having Death for a grandfather does not make for an easy life and Susan struggles to stay on top of the job. Chaos and mayhem ensue.

Part of the theme of this book is music groups and their managers in all their glory. The generation gap is also something that is experienced at the Unseen University. Ridicully’s thoughts on the younger wizards’ fascination with the new fad is typical. Idealism vs. rationality is a struggle Susan has to face. To let or not to let people die.

1996: An animated mini-series adaptation of Soul Music was produced by Cosgrove Hall Films for Channel 4.

The bad guys by Stato Bizley

At the Unseen University the wizards are standing before a nailed shut door, wondering if they should open it – despite the sign that read “Do not, under any circumstances, open this door”. But curiosity is one of the prevailing “talents” of wizards. Ridicully is one of the more curious ones. The door is opened, and what do they find? Bloody Stupid Johnson has been at it again. A wise person would have closed the door again at this moment, but alas. There are not many wise wizards in Ankh-Morpork.

Susan Sto-Helit is enjoying a quit evening at the home she is governessing at. As usual she has put the fear of something into her employer while the children adore her. All of a sudden images formed in her mind. “A red ball … The sharp smell of snow … And then they were gone, and instead there were …

“Susan and the … Hogfather?” by Rebecca M.

She knows right then that trouble is afoot, and its name is most likely DEATH. As you can see from the picture, DEATH does make a lovely Hogfather – travelling to all the children calling HO, HO, HO in his own unique style.

Absurdity, chaos and laughter are only some words to describe Hogfather. When the assassin Teatime is sent to kill the Hogfather, you just know you have to buckle up for a crazy ride. Christmas and all of its stranger sides (consumerism and altruism) are all examined. This is the ultimate Christmas story, one that might make you want to believe in Santa Claus again.

2006: Hogfather adapted by Vadim Jean as a two part TV-serial for SKY

Nanny Ogg is called to a birthing – a very unusual one. Some years later Jeremy Clockson was enjoying dismantling and putting a clock back together again. He’d grown up as a child-prodigy at the Guild of Clockmakers since he was a few days old. Then Lady Myria LeJean with her two troll body-guards steps into his shop. Something about her bothers Jeremy. She wants him to build the most accurate clock in the world.

Miss Susan is a very strict and popular teacher with her pupils. Her main concern is to get her pupils to see things for what they are. But her popularity stems mainly for the class-trips she takes her students on – quite unusual ones that should not be possible. Her view on parents was that there ought to be an exam before they were allowed children. When the Death of Rats comes by to tell her that Death needs her help dealing with the Auditors, she sets off to do her duty.

The Order of Wen or the History Monks have a duty to see that tomorrow happens. One of the novices, Ludd, is causing problems. As a baby, he’d been raised by the Guild of Thieves. Then the monk Soto had stumbled upon Ludd and send him to the temple. There all sorts of unusual things happened our young Ludd. To solve the Master of Novices’ problems, Ludd is placed with another troublemaker – the sweeper Lu Tze. Both Ludd and Lu Tze are surprised by the other.

Going along for a ride with Pratchett is bound to be an insane experience and Thief of Time is no exception to the rule. His way of dealing with events of the day – and usually themes that are relevant no matter when or where one lives (like education, family, duty, propaganda, differences and prejudice) is admirable. It’s the warmth in his work that makes Pratchett so worthwhile to me.

For this blog, I’ve used Wikipedia, L-Space, and the above books as my sources.

One thought on “Pratchett, Terry: Death”