Daisy Fay and the Miracle Man was first published as Coming Attractions in 1981. I just had to add the cover for Coming Attractions because it represents coming of age so perfectly. That is in part what Daisy Fay and the Miracle Man is about – coming of age. Daisy Fay gets a typewriter from her grandmother. For those of you who are too young to understand the concept, this is what a typewriter looks like:

I learned to type on one of these and I imagine Fannie Flagg did too. That was what we had to work with in 1981.

What Fannie Flagg does this time is take us into the life of Daisy Fay. Idyllic is not exactly the word I would use for it. Instead we are shown a resilient girl that grows up in a troubled family. Her way of coping with the realities of her life bring us hilarious and sad situations. She gets into trouble time and again. Sometimes with good cause and sometimes due to the idiocy of the adults around her.

Daisy Fay and the Miracle Man is yet another example of the quality of Fannie Flagg’s writing. I think this is the one that my dad liked the most, probably because of the similarities to his own life. Reading Fannie Flag leaves me with hope for a better future and love for the characters I have just said goodbye to.

As a character in this book I can tell you that everything in it really did happen, so I can highly recommend it without any qualms whatsoever. With this quote from Mrs. Tot Whooten we are once again brought into the universe that one of my favorite authors has created for my and your pleasure.

Fannie Flagg has the gift, the gift I tend to on and on about without being able to define exactly what it is. Most of us have probably experienced the Author Gift at least once. You know those times when you are dragged into a piece of writing while struggling to keep yourself IRL at the same time. What a wonderful time to be a Reader.

Me, I love Aunt Dorothy, our radio-host, and source of information about the happenings in Southern Missouri. She is as complex and well-rounded as a written character can be. Finding her own way around her experiences has made her into the loving and straight-forward (Southern style) person that she is. There is something about the Southern style that is appealing even to this Viking-hearted Norwegian.

“The winner!” screamed Ward McIntire and the audience was on its feet applauding. What glory. What a triumph. Five minutes later Bobby ran into the Trolley Car Diner with gum still sticking to his eyelashes and ears, waving his free-pass book in the air, yelling, “JIMMY … I WON … I DIDN’T GET RATTLED. I WON!” But before Jimmy had a chance to congratulate him he had to run out the door, headed for the drugstore to tell his father. When he got home his mother had to use kerosene to get all the gum out of his hair, and he used up all twenty-five passes in less than a week taking everybody to the movies but he didn’t care. He had blown the biggest bubble in the history of the contest, people said. Maybe the biggest in the entire state. From that day on he felt special. 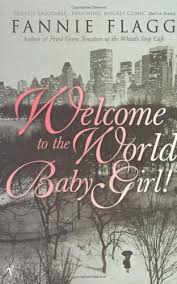 It is one thing for me as a whiteish woman to sit here wondering at a world that makes so many of its citizens feel they need to hide their origins. To me it is an abstract exercise. For others it is not. People (probably myself included) attach shame to attributes that come with birth (whether these be physical or sociological). Imagine the fear of discovery of that “terrible/uncivilised/evil/…” quality. Sometimes these fears are founded and sometimes (fortunately) they are not.

Unravelling the mysteries of the past brings about surprises and feelings of betrayal, loss and love with the characters of Welcome to the World, Baby Girl! Fannie Flagg gives us an opportunity to face our own prejudices in a manner that brings us into the world of gossip and suspense that media is (whether it be new or old). As with Fried Green Tomatoes at the Whistle Stop Cafe, Welcome to the World, Baby Girl! is “utterly irresistible” (Time). You will miss something truly wonderful if you choose not to read this novel.