Illustrations to Milton’s “On the Morning of Christ’s Nativity,” The Thomas Set; Artist: William Blake, 1809

Angelus has three kinds of humans. Evolution made us look different, but we are able to interbreed. The three breeds are Homo Angelus (angels), Homo Daemonis (demons) and Homo Sapiens (us). Because of our high birth-rates, there are more sapiens than angels and demons. During Greek and Roman dominion  angels and demons enjoyed playing gods. The Bible often portrays angels as “good” and demons evil. Around the 11th century persecution became so bad  “The Great Immigration” started and Yeti became more common in the Himalayas.

Neither angels, demons or sapiens have mystical powers in Angelus. Only their looks (and birth-rates) differentiate between the three. Angels are dark-skinned, have dark hair, large, dark leathery wings and a bony ridge along their forehead that looks something like a tiara. Demons are light-skinned, have blondish hair, large horns and a prehensile tail.

Sarah Connelly’s father is a demon and her mother a sapien. Sarah works with SITO (Satellite Intelligence Tracking of Others) in Santa Rosa. Her boss, Starks, is head of the Santa Rosa Department. He is half angel and half sapien (I’m not sure if angels and demons can inter-breed). SITO’s main purpose is to protect angels and demons and to keep them from extinction. Sarah has worked two years in CPU (Child Protective Unite) with families who lost children (runaway or disappeared) or who have mixed children. She also works as nanny for sapien children.

Due to understaffing, Sarah finally gets a chance to show that she “deserves” more than CPU. A half-breed child, subject 342, has come to the attention of SITO. This child is adopted by sapien parents (Code Yellow). Informants have told SITO that the kid and his mom would be at Burbank playground. Sarah takes her nanny charges there and gets the youngest boy to help out with 342. Turns out 342 is something of a surprise to the unsuspecting Sarah. So are his sapien parents. And his stalker. Oh, yes. Subject 342 has his very own stalker.

A broad-shouldered man wrapped in a trench coat, was leaning against the massive trunk of a tree at the edge of the park. The smoke of his cigarette blurred the lines of his dark face as he watched the children. He had been lingering for awhile, but it wasn’t until he started to stare at the children that warning bells rang in my head.

SETI become extremely worried when the stalker’s name is tied to the cult of Moloch. Sarah becomes part of the team that tries to keep Kel out of the hands of the Cult. I totally get that, because cults are scary things. But keeping Kel out of Molochite hands proves difficult and Sarah discovers that maybe getting what she wanted, wasn’t what she really wanted.

Angelus contains some violence but not much gore. But there is plenty of action. There is some drooling but little romance and I really liked that. I think the target group is Young Adult.

Angelus can be found on Amazon

The cougar works a powerful magic on the human imagination. Perhaps it is envy. This majestic feline personifies strength, movement, grace, stealth, independence, and the wilderness spirit. It wanders enormous tracts of American wilderness at will. It is equally at home in forest, desert, jungle, or swamp. An adult cougar can bring down a full-grown mule deer in seconds. It yields to few creatures, save, bears and humans. (Mountain Lion Foundation)

Now take a look at one of the descriptions of Missy from Missy the Werecat. Missy has just come back from the wild, rescued a family and is thought to have been kept a prisoner for two years:

She moved with a smooth grace but also exuded strength and power, somehow giving an impression of greatness in spite of her only being a teenage girl. …

entering the room in full command of herself, alert and aware. Fearless. With depths that could not be penetrated. This Missy was not at all a victim, in any way …

After Missy comes back down from the mountains, having learned to control her changes, she befriends a girl called Alice. Alice was being sexually abused by her step-father and Missy stepped in to stop it. Stepping in while Alice was still so young, in addition to giving Alice the support she needed, helped Alice work her way through the sexual abuse as much as possible.

During a period of my life I went through some sexual abuse periods myself. To have had a Missy in my life at that point would have made a great difference. However, the norm in such cases is to have them explained away or denied. It’s simply too difficult for non-pedophiles to think that there are people out there who get turned on by such things.

Throughout her whole story of Missy the Werecat, P.G. Allison was carefully open about the darker sides of life. At the same time she made sure we understood the importance of people like Missy in the lives of those being affected by predators. Sometimes it takes a predator to hunt down other predators and, as most of us come to know, not all predators are out to hurt people.

Missy the Werecat is very US in its style. It is definitely written for a younger audience. Some violence was explicit and some sexual content was also explicit, yet it was explicit in an age-appropriate manner. I was surprised by the balance between sexual and violent content as I am not used to that from US authors. To make up for that there were the standard moralistic teachings found in US stories. In the end that did not matter to me and I for one was glad that such a person/mountain lion blessed the lives of so many people (and frightened the ☠@✴# out of others).

Missy the Werecat on Amazon US 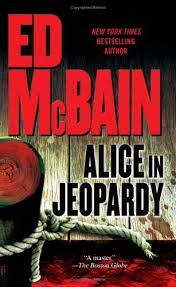 I’ve seen several readers on Amazon  complaining of McBain‘s treatment of “Alice in Jeopardy”. Just because McBain has strayed from his “Precinct” characterization does not mean that the quality of his writing has diminished. It is as it has always been, good quality mystery prose.

This is a fun mystery. The “bad” guy is a surprise and Alice, our heroine, is fairly three-dimensional. Alice’s two children are kidnapped, and this is the story of getting them back and finding the bad guy.

There is plenty of action and psychology, necessary ingredients in a mystery. McBain was truly one of the better mystery writers out there.