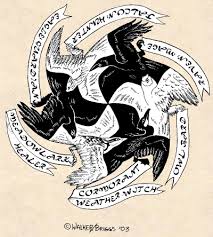 Prejudice and fear seem to be recurring themes in Patricia Brigg’s novels. Raven’s Shadow is no exception. In this instance, the Travellers are the persecuted people. We see instances of this today. In general there seems to be a lack of trust towards people who do not stay in one place and become part of the community. It makes it a whole lot easier to blame them for something, as our links to them won’t be a strong as they would be towards a neighbor. Such is the world of Travellers in Briggs Raven duology.

Tier and Seraph are our two main protagonists in Raven’s Shadow. We meet Tier as he is on his way home from the war. Tier is a rebel. His father was a baker and the expectation was that Tier would take over the craft. But Tier wanted to see the world and did that. Unfortunately, he also ended up disillusioned about the state of the world.

As he enters a village he see a large bon-fire in the town square. A Traveller was burned suspected of using magic. Inside the town’s inn the citizens have joined in drinking to their “brave deed”. Left behind is a young woman. The innkeeper has decided to sell the girl to the highest bidder. Tier ends up buying her, Seraph a Raven traveller who has no reason to trust Tier. This is the beginning of the journey of Seraph and Tier, a journey fraught with danger and betrayal – you know the spiel. I liked both Raven’s Shadow and Raven’s Strike. While not complicated, they are easy to read.

Tier has been rescued and the family is taking it easy on the way home from the Capitol after the run-in with the wizards. Part of the way, they have chosen to travel with Benoin and his tribe. On the way they come to a village where a shadow creature has killed some of the villagers. The creature is taken care of, but the family soon realises that it is just a symptom of what is happening in the land.

At the same time, Tier seems to be having trouble recovering his magic. It seems to be fraying and drawn away from him. Seraph cannot figure out what the problem is, but slowly the family is being led to the ancient city of Collosae – the city where the Travellers came from.

Raven’s Strike tied up a few loose ends and was a good follow-up to Raven’s Shadow. They are both typical examples of Brigg’s writing: light, fun and accessible.