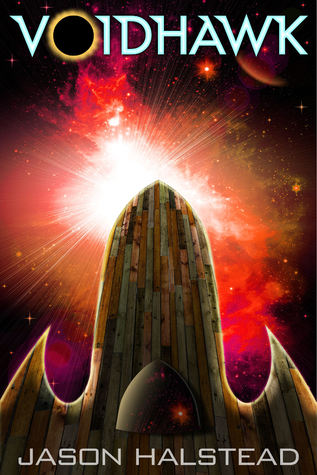 Longing for his own spaceship, Dexter Silvercloud drags his friend Kragor away from his life as a married man to fix a space derelict called Hawk’s Talon. The space ship is stuck in the asteroid field off their planet. Two nights a week are spent fixing up the vessel and Dexter will do anything to buy it. The rest of the week is spent getting enough money together to buy Hawk’s Talon.

One day while traversing the Playground to fetch his friend Dexter stumbled into an ambush. Contrary to stories told around hearths with mulled ale, most ship to ship encounters in the void do not involve catapult shot and ballista bolts flying. Even the rare bombards so often talked about in the story are seldom seen, let alone fired. Only the Federation and the Elven Armada ships are prone to fire at the slightest provocation. Repairs and even ammunition are too expensive for the private ship owner to run the risk.

Three small ships emerged from teh background of floating rocks to close with him. Dexter quickly identified an Ant, a Dart, and the third was little more than a skiff with a sail upon it. Dexter sped up his Gnat, risking the perils of the asteroid field and trying to lose the pursuing ships. Being a Federation scout ship, Dexter was correct in assuming that his was faster than the pirates. They were very familiar with the asteroid field; however, so he was unable to lose them.

The largest one, the Ant, slammed into a pony sized rock, sending one man flying into the void and another to the deck bleeding. Broken planks of wood drifted free, bobbing in the small vessel’s gravity plane. Seeing that gave Dexter an idea.

Yes. You read correctly. Space vessels with wood plating and sails. In space. Sail ships in space. Sorry. I just cannot comprehend why Halstead would choose to place sail ships in space. It makes no sense. Even if they have their own gravity wells. Even though I do not hold space operas to the same rules as most other forms of science fiction. There are  minimum requirements that I have, and Halstead keeps on breaking them throughout the story.

One of the reasons I think I kept on reading was because of a fascination with an author who completely disregards physical laws. Plus Halstead’s writing is halfway decent. If only he had chosen a stricter editor and science fiction beta-readers. Sadly, Voidhawk‘s characters suffer from the same lack.

I cannot say that I recommend Voidhawk. If only … I probably would have.