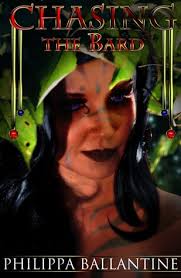 Cover Art by Alex White of the Gearheart

Wow, what a touching novel Chasing The Bard turned out to be. Philippa Ballantine of New Zealand has done an excellent job in portraying that sense of superiority that sometimes comes with privilege in her portrayal of the fey and humans.

William Shakespeare and the Goddess of Battle Sive are both changed in this meeting between fey and human. Shakespeare is born with the Art of the Bard, and the fey need his help in saving them. But enlisting the help of one stubborn male might not be as simple as Sive had thought. For not all in the universe believe that the fey world is the world one should prefer.

There is a dark undertone to this novel that is lightened by Puck, the trickster. One would expect the god of pranks to hold such a role. But as the novel moves along, Puck takes on another dimension, one brought about by disappointment and grief.

Sive’s feelings of superiority remain, yet deteriorate as her own circumstances become more and more dire, while William’s excuses in life will be faced before he can fulfill his “Destiny”.

Well worth the read. I believe Ballantine has gotten another fan.