My first meeting with Fannie Flagg (or Patricia Neal) was on the film-creen. I am trying to remember just how far back she and I go, and I believe I might have a tentative meeting period set at Grease the movie (with Olivia Newton-John and John Travolta).

When I encountered her literary work I had become an adult. Fried Green Tomatoes at the Whistle Stop Cafe became a movie. I got to meet the two friends Idgie and Ruth whose experiences made me laugh and cry. 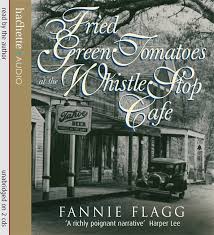 Another few years down the road, I picked up the novel and fell in love again. Fannie Flagg became one of my favorite authors just a few pages into the book. And now, just a few weeks ago my dad fell in love as well, and not just with Fried Green Tomatoes. Having read one of her novels, he just had to borrow the rest of the Fannie Flagg novels I have in my library.

Part of his love for her work lay in the time period described. These were tough times in the US and the rest of the world. They weren’t called the depression years for nothing. Alabama struggled with recognizing women and non-christians/whites as equals.

I would have wanted Idgie for a friend. Her love, fierceness and loyalty toward Ruth is priceless. Ruth needs someone like Idgie to be able to see beyond the prison that life made for her.

I love the humour in the novel. When the search for Frank Bennett is on and Sheriff Kilgore eats at the cafe is priceless. Another moment occurs right after when the Sheriff steps into the beauty parlor with his men and gets thrown out all embarrassed at having overstepped the gender boundaries.

The story of the storyteller, Cleo Threadgoode, and her listener, Evelyn Couch, is heart-warming and uplifting. I still carry the images of the changes in Evelyn from the movie in my head. Her change in the novel are just as immense.

Flagg managed the job of jumping between the storyteller and her memories. Her writing flows, boy does it flow. If you want to read a novel about life, then Fannie Flagg is the author to read. 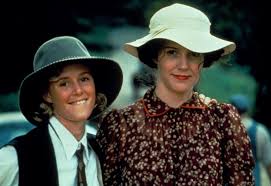 The film Fried Green Tomatoes came out in 1991 and is based on the novel.