I think A Cast of Stones fits the Harry Potter age range. Patrick W. Carr’s writing is technically excellent. The story is well-edited and the text flows from sentence to sentence. As far as plots go, A Cast of Stones is stereotypical epic fantasy and much of it reminds me of other stories. Readers should be able to tell how the trilogy will end after finishing A Cast of Stones. At times Carr fell for the temptation to moralize. In spite of this, I recommend it for readers who need clear HEROs. Errol is definitely that. He starts as one by being an orphan. However, the way we find him at the beginning of the story is atypical of the Heo story.

Cruk grunted and grimaced his imitation of a smile. “The boy’s got the right of it. He is pretty useless.”

That uselessness is due, for the most part, to his alcoholism. A few years earlier, when he was 14 years old, Errol experienced something traumatic enough to drive him to drink. Being an orphan made it easier to go down that road. Because he is our HERO, we know he must find his way to a heroic personality.

In the village Errol grew up in, the leader of the boys, and the “chosen one” is Liam. He has most of the qualities that make up good leaders: Magnetic personality, is talented at everything he works to achieve, smart, tries to do what is right (but also what is kind) and lives as he preaches.

“We’re all the same,” Liam said. “I just concentrate and try really hard at everything. Anyone can do it if they just try hard enough.”

In spite of his near-perfectness, Errol admires Liam. And so does every other person Liam meets. Paritcularly women. But Liam is not affected by this adoration and seems not to notice it. Errol and Liam are joined by Martin, Luis and Crux. All three have secrets they hide from the “boys” (19 years old) and pasts they need to pick up again. Martin and Luis are meddlers and Crux a protector. He is also a tough teacher for Errol who lacks most “civilized knowledge”.

At times, the methods employed by meddling Martin and Luis are highly questionable. They,  appear to believe that “the end justifies the means”. For churchmen and believers, they do not have much faith. In fact, that could probably be said of most of the church leaders we meet in this trilogy. Faith in their deity’s power is low.

The religion we learn about in A Cast of Stones is similar to the Roman-Catholic faith. Three-in-one godhead, celibate priesthood, rituals and hierarchies are close to identical to the RC church. Except for the magic bit that its Readers employ. Any magic but Reader-magic is forbidden and magic-users are usually killed. Rulers inherit their power but each ruler is invested with his (yes, his) powers. The old King has no heirs, which is why a new one must be found. Errol and Liam play an important role in picking the new ruler. No wonder people want to stop them.

One of the people who tries to hinder Errol from fulfilling his heroic destiny is Abbot Morin. He also believes that “the end justifies the means”. Some of his means carry a high price for both Errol and himself. However, everything that is thrown his way is meant to mould Errol into the Hero he most likely needs to become before the end of the trilogy. The trilogy is set up as a combination of serial and series. Certain threads are tied up while others remain tantalizingly open, much as most Hero trilogies do. I enjoyed it.

You could probably start reading The Bastard Cadre series with The Lord of Frake’s Peak. That is because it goes back to the story of the early days of the reign of Lord Obdurin. As long as you don’t mind the spoilers as the beginning of the novel you should be fine. The only problem with doing this is that you would be reading the best first because Lee Carlon‘s writing has gone from one bastion to the next during these four novels.

I am fairly certain the gods aren’t gods. After I finished reading The Lord of Frake’s Peak I knew that the “whatever they are – not gods” had done all they could to keep humans in ignorance. The Cleansing that had occurred three years before the beginning of The Lord of Frake’s Peak seems like something they would do to keep their secret safe because they felt some person had come too close to the truth. I’m still not clear on whether there are any female gods or if there are genders at all. Whatever the case is there, these so-called gods seem to be amoral beings playing the world and humans for what they can. People like that stink. That is my completely unbiased (snort) opinion.

Lord Obdurin is only one of the many chosen running about doing the gods’ deeds. His god is Rhysin. To become a chosen Lord Obdurin had to get the heart of Rhysin from his predecessor, Lord Benshi. Something terrible seems to happen over time to all of the Chosen. Part of the amorality of the gods seems to enter them and they go from being whatever type of person they used to be to taking on part of the nature of the god. If that is the case, Rhysin must be a brute. Lord Benshi became one and his sons paid a terrible price for it.

Vincent d’Rhyne is the only surviving son of Lord Benshi. He wants nothing to do with Rhysin but is not able to tear himself from the place he grew up. Lord Obdurin spared Vincent for some reason only Obdurin knows when Lord Benshi died. Vincent feels only relief at having his father out of his life. Of the two, Vincent feels that Lord Obdurin is the best alternative. Having read all four installments of The Bastard Cadre I find myself unable to give a clear answer as to whether Vincent trusts in vain.

Trust might be the wrong word, but it seems pretty close to how Vincent feels toward Lord Obdurin. It is as if Vincent trusts that Obdurin will keep him from reaching for the gods. But the reach of the gods might be longer than any of the inhabitants of Carlon’s world might know. Perhaps they are all just part of a huge video game.

Life sometimes feels like that. The joke has been on Vincent so many times that it is becoming more and more difficult for him to remember that life is just a big joke. His ability to stay in the present fluctuates. Considering how traumatized Vincent it is a wonder that he manages to stay there at all.

Mr. Carlon sent me a copy of Frake’s Peak – no strings attached.

Lane Robins writing as Lyn Benedict is the author of the Shadows Inquiries series. I think you’ll find that all of these books lean toward the lighter side of fantasy literature. Sylvie Lightner’s character lives in Miami, a slightly different Miami from what most people associate with it. This is a place where the magical and godly take up a lot of space.

Sylvie is the owner of Shadows Inquiries, a P.I. firm that investigates the supernatural. Sylvie Lightner fits the mold that most women in urban fantasy seem to be cast to. The difference in these books is that there seems to be a darker undertone, and Sylvie might be slightly darker than the average. Benedict’s writing is good. The plots are as below, so nothing really complicated.

When one of Sylvie’s employees ends up killed during a case, Sylvie decides she has had enough of investigating the weird and unusual. It is time to close shop.

Then Kevin Dunne turns up looking for his lover, and he just will not take no for an answer. Sometimes you just cannot fight “fate” and Sylvie ends up working for Dunne. Knowing who/what Kevin Dunne is does not make the job pressure any lighter – quite the opposite in fact.

Sylvie’s least favorite part of the whole investigation is that she has to involve friends and her employee Alex. Sometimes the consequences are anything but good and the battle Sylvie has to fight is against herself and the supernatural community.

Sins & Shadows is great entertainment and has no pretensions of grandeur. It delivers what it promises – escape from reality for a while.

Once again Benedict writes an entertaining book about the world of Sylvie Lightner. As the title says, ghosts will appear.

During the investigation of what appears to be simple burglaries, Sylvie discovers the involvement hands of glory. On top of looking into the burglaries, Sylvie has to look after her rebellious sister, Zoe. Sylvie feels she has more than enough on her plate.

But the fates would have it otherwise. While investigating the burglaries case, Sylvie is approached by detective Adam Wright who thinks he has picked up the ghost of a dead man. Against her will, Sylvie is drawn into the fate of detective Wright.

Ghosts, black magic and a wayward sister are bound to make for an exciting time for Sylvie. Fortunately for her she has her trusted employee, Alex, helping her out.

The third novel in the Shadows Inquiries series follows in the path of the first two. Once again Sylvie Lightner is confronted with a mystery that only she is able to solve (with the help of a few others).

The legacy of her bloodline – with all of its inherent anger – continues to plague Sylvie. What others might think of as the gift of the century, Sylvie feels is more of a curse. But she will find it invaluable during the process of the novel.

Five women turn up dead in the Everglades. While something feels off about the whole thing, Sylvie decides this is probably a regular murder case. Hah, hah. When the bodies come to life and start killing, Sylvie has to step in and take what help she can in figuring out what dark magic is afoot.

The help of a necromancer is what Sylvie ends up with. Together they end up confronting the world of gods, and once again Sylvie decides that the gods are not all that great.

The three people Sylvie cares most about are threatened. Zoe, Alex and Demalion are the one thing that can bring Sylvie out of her hiding and into investigating the magical attacks on Internal Surveillance and Investigation government agency.

What Sylvie has discovered throughout the other three books is that she needs help and does not have to do everything alone. That is definitely true in Lies & Omens. Sylvie will need all the help she can get in order to save the mundane world from the magical one.

As a final book in the Shadows Inquiries’ series, Lies & Omens works pretty well. The conclusion tied up loose ends and felt satisfactory. 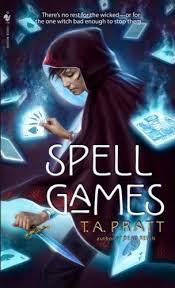 This is the 4th book in the Marla Mason series. I haven’t read the previous installments: “Blood Engines”, “Poison Sleep” and “Dead Reign”, but still felt as though I was able to follow the story-line.

In “Spell Games” Marla’s long-lost brother turns up in her life again. They parted on bad terms and Marla isn’t sure how she feels about seeing him again. But her brother, Jason, is a con-artist and quite a talker and manages to convince Marla to give him a chance. She ends up helping him with a con, and surprisingly has quite a good time – until complications arise.

There are some really strange characters in this novel. One of them is a mushroom-worshipping sorcerer. I guess  that’s what I liked about “Spell Games” – its strange twists and turns and dry wit.

As entertainment, this is a pretty good choice of reading.